A few weekends ago I dropped by a local smoke shop in Waterloo, ON, CA by the name of Walper Tobacco Shop. I was referred here by professor and faculty member Joseph Emerson at the Institute of Quantum Computing. I was quite skeptical of the place at first being that Canada does not grow it’s own tobacco but gets it from Virginia (or some other place in USA). ANYWHO, being that I’m from the states and there is still an embargo on Cuba and I have never been out of the states until now, I thought I would buy me a Cuban Cigar. Here’s what I went with:

This was a Romeo y Julieta made in Habana, Cuba. I am no cigar connoisseur and as such my opinion is only from a novice cigar smoker so reader forewarned! Anyways, onto the actual smoke! I enjoyed this cigar very much for my first Cuban. It had a very mild flavor and the after taste was very pleasant. One characteristic of these cigars is the brilliant white ash it produces which is pretty neat to see! I got almost an inch and a half of ash on this one, although I am no expert on these games I thought it was pretty good!

I also bought a bag of smoking tobacco while I was there: Plum Berry. I am not one for smoking things with fruit in the title but this one smelled too good to resist: 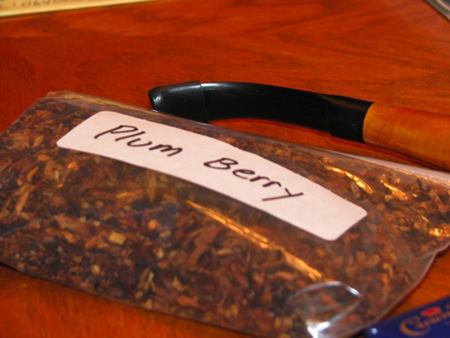 I have had about 5 bowls out of this bag already and the taste is superb! I did not think I would like the berry taste but I was mistaken! A very good smoke indeed.